The Rolex Submariner is a dive watch legend. From its many appearances in the James Bond franchise to gracing the wrists of numerous A-list celebrities, the Submariner has become one of the most recognizable and coveted luxury watches in the world. The line is varied and offers options in either an all Oystersteel (904L stainless steel), Rolesor (two-tone steel and gold), or solid 18k gold. Today, we will compare two of the most iconic two-tone Rolex Submariner references – the Rolex 16613 and Rolex 116613.

The men’s Rolex Submariner was developed in 1953 and made its official debut during Basel Watch Fair the following year. One of the first dive watches to offer a 100-meter depth rating, the Submariner essentially paved the way for the modern dive watch as we know it today. Over the years, the Submariner has seen many notable upgrades, including the addition of a date display in the 1960s, the switch from acrylic to sapphire crystals in the late 1970s, and the change from radioactive tritium to photoluminescent lume in the 1990s. The Submariner was initially only available in stainless steel; a two-tone variant didn’t become available until 1984 via the ref. 16803. 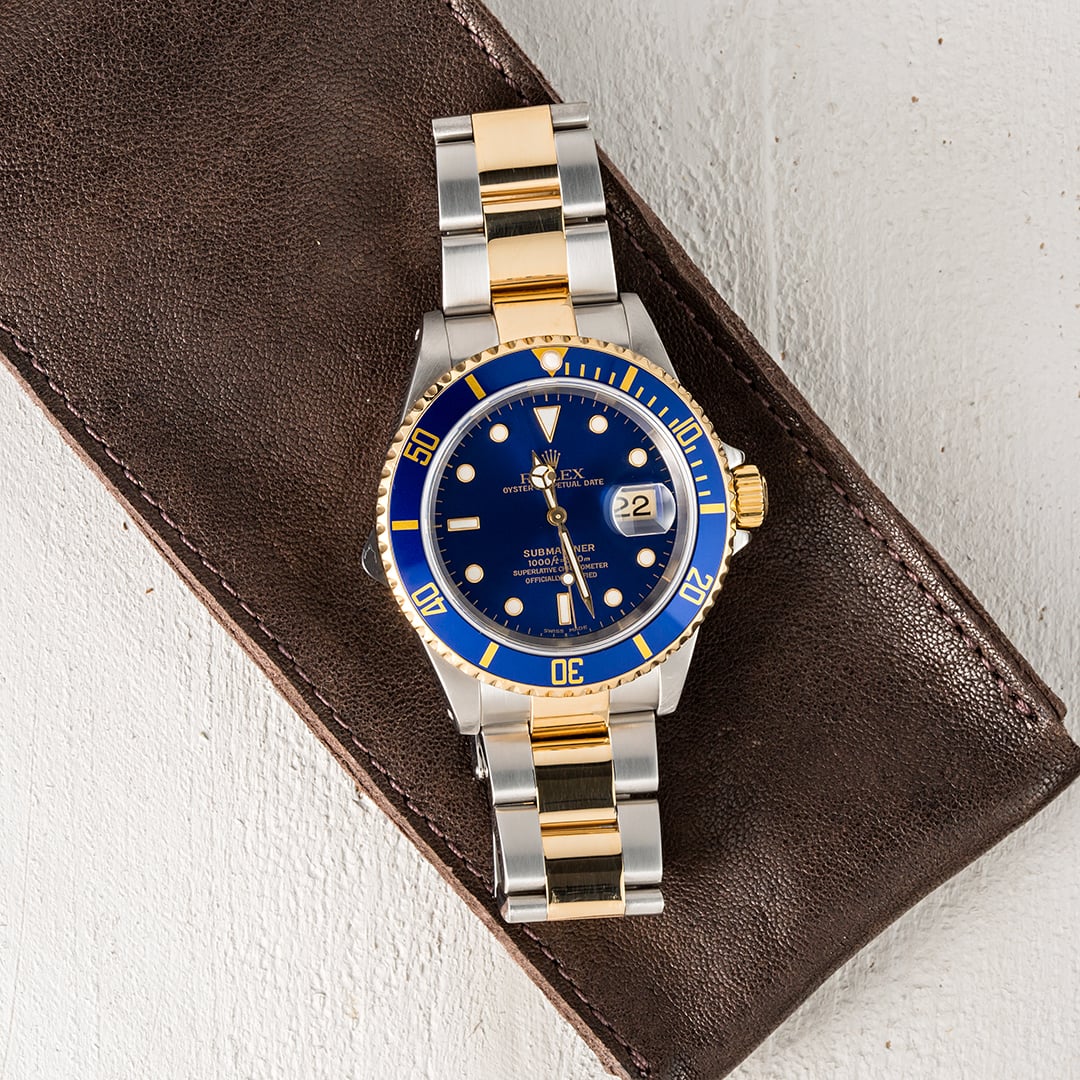 That brings us to the two examples that are featured here in today’s comparison video. The Rolex 16613 made its debut in 1988 and was the final aluminum bezel Submariner. The ref. 116613 was introduced in 2009 and features a completely redesigned feature set that swapped the aluminum bezel out for a tougher Cerachrom ceramic insert and features an all-new case and bracelet design. While both references are similar, they each bring a different aesthetic to the table.

The Rolex Submariner 16613 was produced for over twenty years. During that time, it became available in many variations, including either a black or blue dial and bezel set, stunning champagne or silver “Serti” dials adorned with gems, lug holes on the case or no holes, and different luminous material on the dial. Two features that remain consistent among the reference variations are the two-tone steel and gold finish of the case and the aluminum insert on the bezel.

With the unveiling of the modern 116613 Submariner in Yellow Rolesor (aka two-tone stainless steel and 18k yellow gold) came a newer-style “Super Case” which, despite offering the same 40mm diameter as the ref. 16613, appears slightly larger. The lugs and crown guard are wider, and the bezel received a new mounting design, giving the case a slightly more robust appearance and refined bezel action. 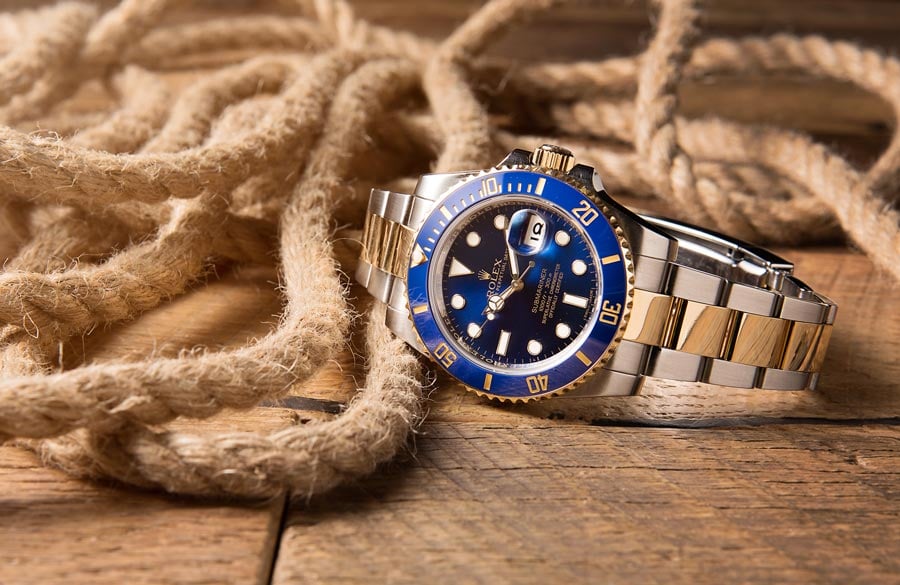 As previously mentioned, the case also received a ceramic “Cerachrom” insert, which is virtually scratch-proof and will not fade and lose its vibrant color like aluminum. The ref. 116613 is also available with Rolex’s patented “Chromalight” lume on the dial, which offers a bright, blue glow for up to 8 continuous hours (as well as larger plots). Similar to the ref. 16613, the newer model Submariner Rolex 116613 is also available with either a blue or black dial and bezel combination. However, the Serti dials on the 116613 only come in blue or black (rather than champagne or silver), and do not feature sapphires set into the markers on the 6, 9, and 12 o’clock locations. Instead, ref. 116613 Serti dials only have 8 diamonds set in them, and feature lume-filled indexes for the 6, 9, and 12 o’clock hour markers.

Both the Submariner 16613 and 116613 run on the Rolex Caliber 3135 perpetual movement with a 48-hour power reserve. However, the version of the Cal. 3135 inside the newer ref. 116613 is fitted with an upgraded paramagnetic blue Parachrom hairspring for better resistance to shocks and temperature variations. 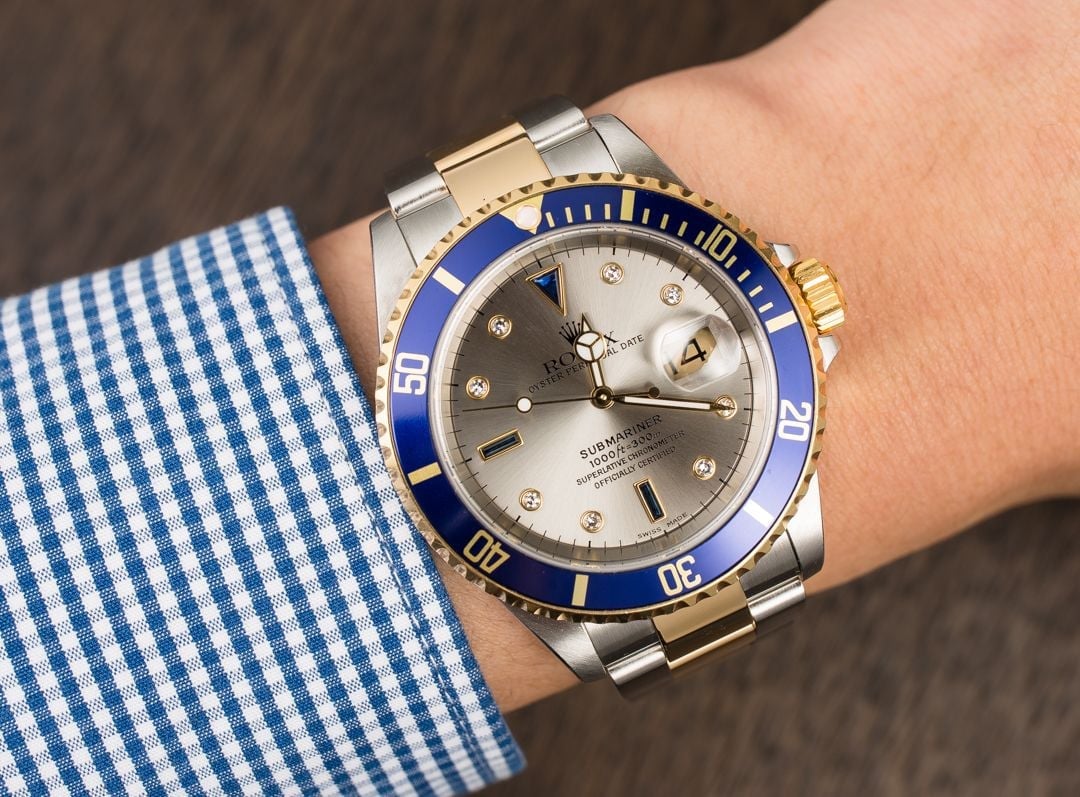 Lastly, both the 16613 and the 116613 are fitted with stainless steel and 18k yellow gold Oyster bracelets. Depending on the year released, the ref. 16613 has either solid or hollow end-links, either a stamped or link-style fold-out extension system, and either a gold-through or an all-steel clasp. Collectors have different preferences on 16613 bracelet styles, making it a fun watch to collect.

The ref. 116613 offers a more substantial hold on the wrist than its 5-digit predecessor and features solid gold center links, solid end-links, and a machined Oysterlock clasp with an innovative Glidelock extension system. The solid construction of the bracelet balances the Super Case nicely on the wrist for a supremely comfortable hold, even over wetsuits.

While the ref. 116613 is noticeably more modern in appearance, it still boasts many similarities to the ref. 16613 in the form of a versatile two-tone finish, similar dial and bezel color options, the same water-resistance of up to 1,000 feet (300 meters), and an Oyster bracelet that wears comfortably and allows for tool-free adjustment over wetsuits. When collecting, it ultimately comes down to preference; do you prefer a classic or a contemporary dive watch? 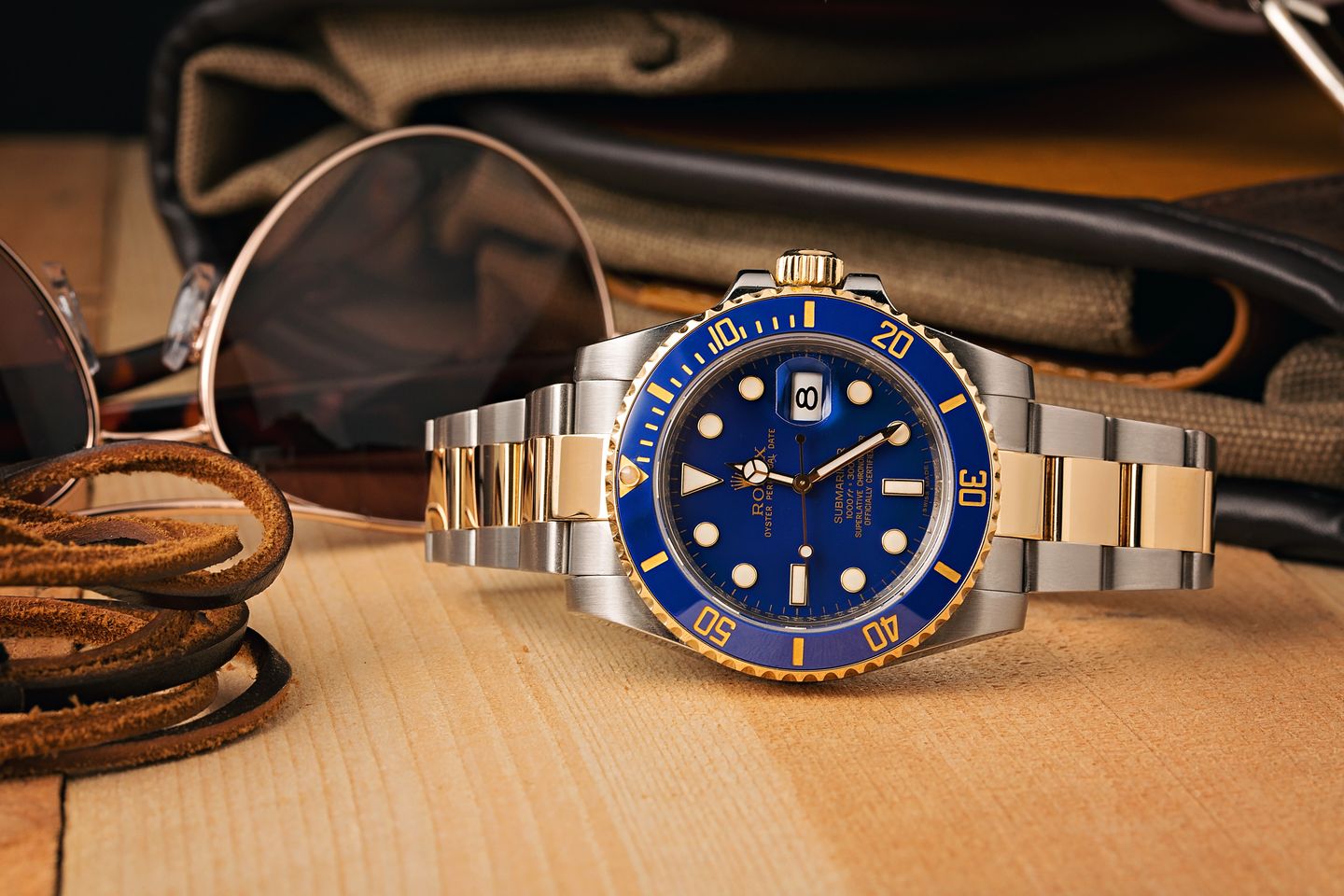