The reference 1680 was the very first date-displaying Rolex Submariner model, which makes it an especially important reference in the history of the brand’s famous dive watch. Like many vintage Rolex watches, the Submariner Date ref. 1680 came in several iterations and the so-called “Red Sub” models are some of the most collectible of them all. If you’re a Rolex enthusiast, you will have no doubt heard about the Red Sub 1680 and if you’re a new collector, then this is a watch that’s well worth studying.

Its nickname may be simple – the Red Sub gets its name from the red Submariner text on the dial – but understanding this particular vintage Rolex and all of its variations isn’t quite as straightforward. With no less than seven dial variants produced in a handful of years, not to mention an important movement upgrade at the tail end of its production run, there’s plenty to learn about the Rolex “Red” Submariner. Ready to dive in? Here’s our ultimate guide to the Rolex Submariner 1680 Red Sub. 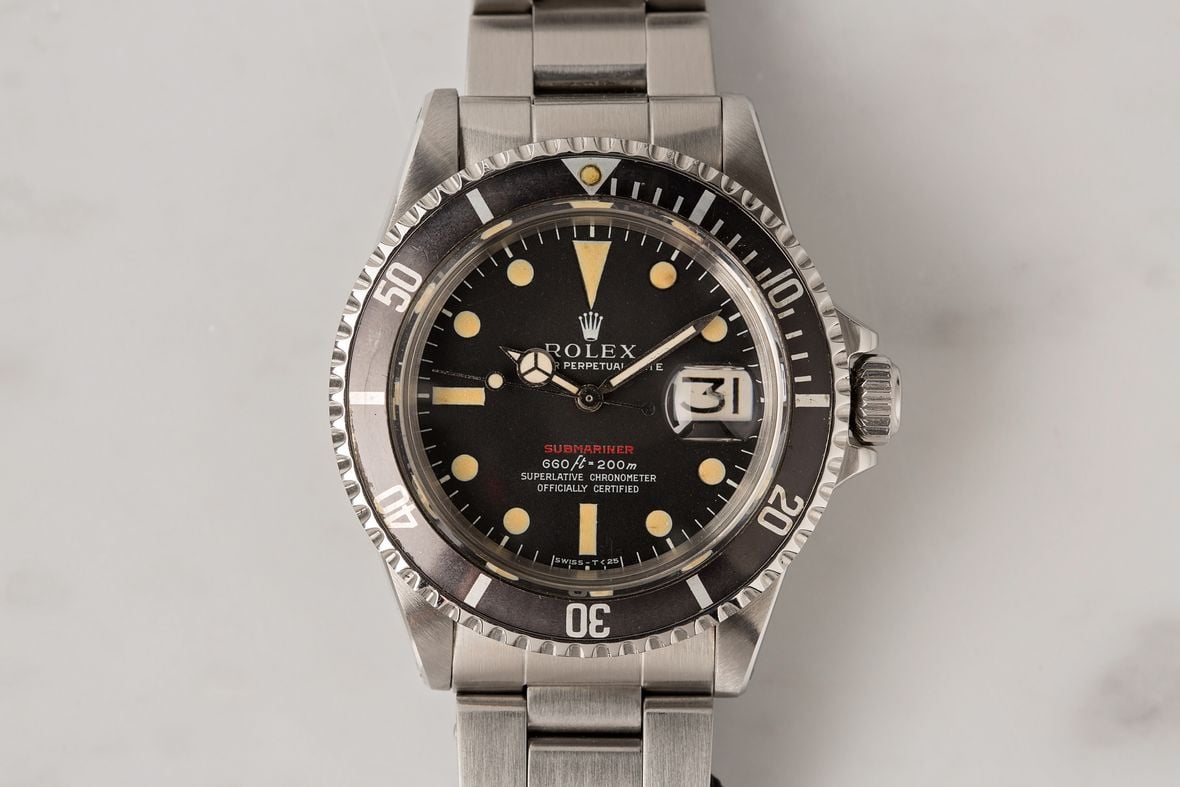 Click here for our Ultimate Buying Guide on the Rolex Submariner 1680. 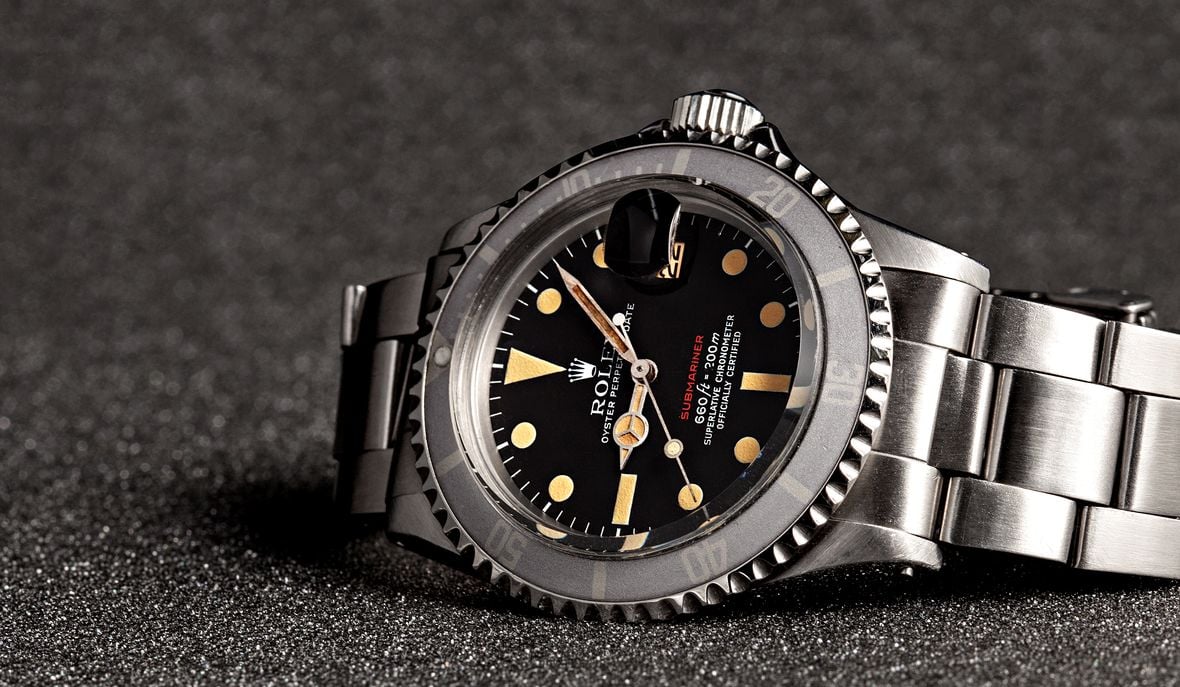 Rolex introduced the Submariner 1680 in 1967 and continued to manufacture the reference until about 1980. However, the “Red” Submariner with its characteristic red name on the dial was only produced for the first part of the ref. 1680’s production run, until approximately 1975.

When the ref. 1680 appeared on the market, it was the first Rolex Submariner to feature a date complication – breaking away from the original line of Submariner watches with time-only dials. Yet, this wasn’t the first Rolex dive watch with a date window since the Sea-Dweller had already made its debut that same year. While the Sea-Dweller did not include a Cyclops magnification lens above the date window at 3 o’clock, the Submariner ref. 1680 did, and a Cyclops lens has made an appearance on every single Rolex Submariner Date model ever since.

Similar to the no-date Submariners of the era (ref. 5512 and ref. 551) the Submariner Date 1680 was water-resistant to 200 meters (rather than the 300 meters offered by modern Submariner references). It also had the now-established crown guards around the winding crown and a black aluminum insert fitted in its bidirectional timing bezel.

Although Rolex only produced the red version of the Submariner ref. 1680 for a handful of years, collectors have identified at least seven dial variations (which we’ll get the details below.) Not only did Rolex manufacture the Red Sub for a relatively short period but examples with original dials are also seldom seen since many were furnished with later-era all-white dials during routine servicing. 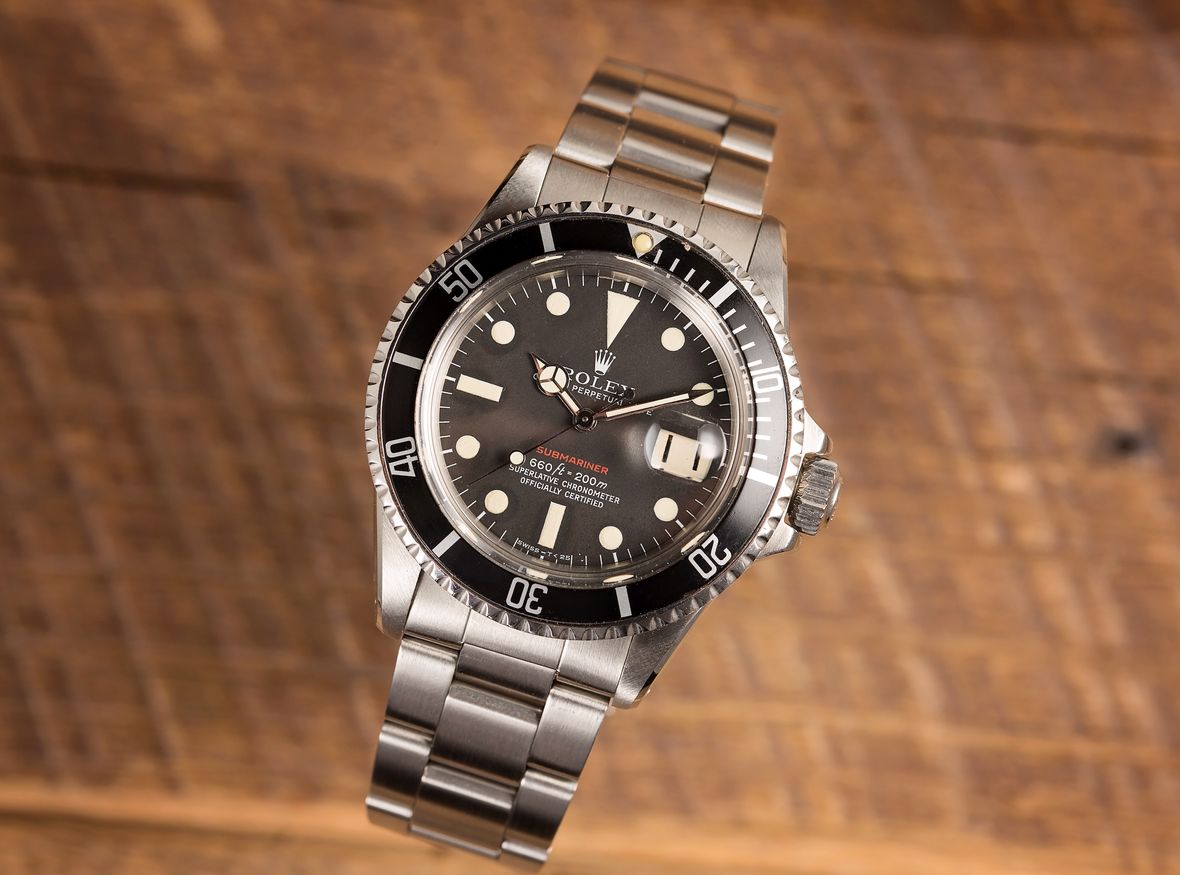 Since Rolex stopped producing the Red Submariner 1680 in the 1970s, every subsequent rendition of the stainless steel Submariner has been fitted with an entirely black and white dial (with the exception of the all-green “Hulk” Submariner). This design choice makes it incredibly easy to spot one of these rare, Red Submariner watches, as the name and color instantly stand out against the monochromatic color profile of the rest of the watch. While this unique feature makes Red Rolex Submariner watches easy to spot, it doesn’t make them any easier to find for sale!

2. THE REFERENCE 1680 WAS THE FIRST SUBMARINER TO OFFER A DATE FUNCTION

When Rolex unveiled the ref. 1680 (the earliest examples being Red Submariner watches) it was the first Submariner to be equipped with the date window at 3 o’clock and the magnifying Cyclops lens affixed to the surface of its acrylic crystal. Due to the added date feature, a different movement from the one used in the no-date Subs was needed. The Submariner Date ref. 1680 ran on the Caliber 1575, which was based on the existing Caliber 1570 but with an added date function. With that in mind, it is important to note that the calibers inside the ref. 1680 are stamped “1570” (as are all other Cal. 1575 movements).

3. THE REF. 1680 IS THE ONLY SUBMARINER DATE TO FEATURE AN ACRYLIC CRYSTAL

4. THERE ARE SEVEN DIAL VARIATIONS OF THE RED SUBMARINER 1680

5. THE RED SUBMARINER 1680 WAS ORIGINALLY OUTFITTED WITH A “FAT FONT” BEZEL

When Rolex released the Submariner 1680, it was outfitted with what we now refer to as “fat font” bezels because of their thicker numbers. These original bezels typically faded over time, therefore, Rolex often replaced them with newer, “thin font” bezels during routine servicing. As a result, hunting down a Red Sub 1680 with its original fat font bezel can be tricky, but definitely well worth the effort. 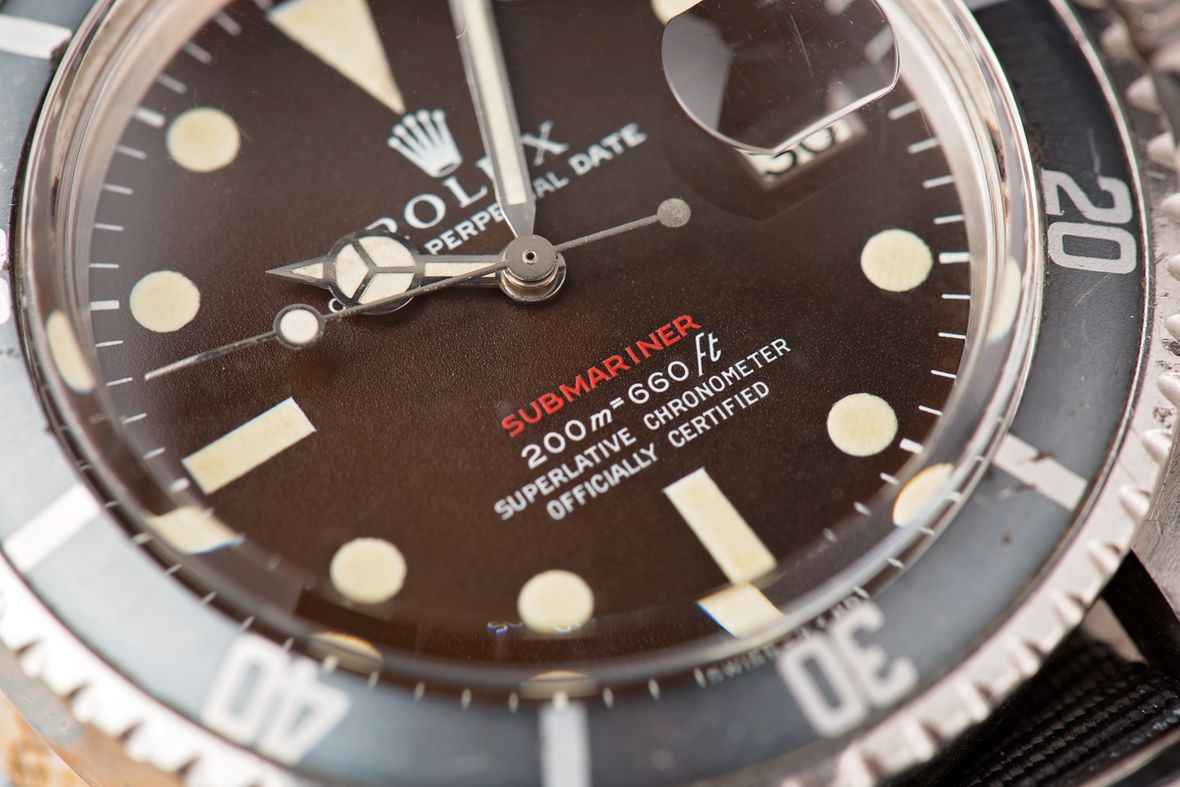 The Rolex Submariner 1680 was produced with a total of eight different dial variations (including the non-Red versions with all-white text). These variations are typically referred to as MK1 through MK8 (often appearing as MKI to MKVIII). Included is the rare Red Submariner Service Dial that features LumiNova instead of tritium. Before we outlined the MK dial variations of the Red Sub, here’s some key vocabulary to understand.

– MK: MK stands for “Mark” or “Make” (a designation of the different dial styles).

– Open Sixes: On the Red Submariner 1680 dials you will see the depth rating printed in both meters and feet. The watch offers users 660 feet of water resistance, and on the different dial variations, you will see the Arabic numeral sixes printed with an open and closed font. The open font sixes we refer to as ‘open sixes’ and it is one of the key ways to differentiate between the different variations.

– Meters First: You will always see the depth rating on the dial of the Red Submariner 1680 printed in both meters and feet. However, on some earlier dials, the meter depth rating appears first, thus designating it as a ‘meters first’ dial.

– Feet First: The Red Submariner 1680 will always display a depth rating. On the ‘feet first’ dials, the feet depth rating appears before the meter rating, and the trait is representative of later-era styles of Red Submariner dials. 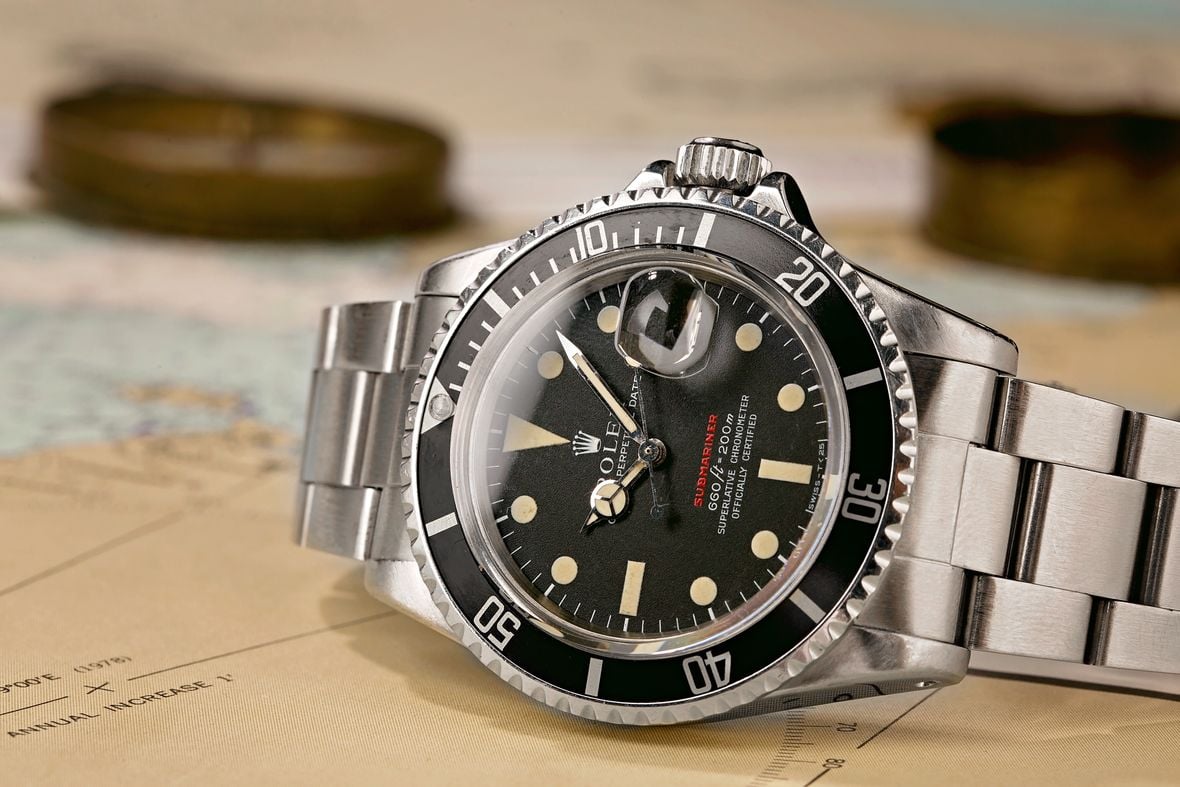 The earliest iteration of the Red Sub dial, MK1 dials will all be of the meters-first variety with their red “SUBMARINER” name printed on top of white letters. Additionally, MK1 Red Submariner dials will feature closed sixes. If you look closely at the font for the ‘ft’ of the depth rating, the ‘f’ in ‘ft’ curls up above the ‘t’ slightly.

The first MK2 dial appeared in 1969/1970, as did the MK3, which is nearly identical in its overall appearance. However, there are subtle differences that separate these two variations of Red Submariner dials. Like the MK1 dials, MK2 dials are meters-first and will have the red “SUBMARINER” name printed on top of white text. However, MK2 dials will feature open sixes, and the top of the ‘f’ does not extend as far as on MK1 Red Submariner dials.

Red Submariner MK3 dials are incredibly similar to MK2 dials as they are also meters-first with open sixes. However, while MK2 dials have the red ‘SUBMARINER’ text printed on top of white, MK3 dials will have it printed directly onto the dial surface, and the ‘f’ in the depth rating is shorter than it appears on MK2 Red Submariner dials.

MK4 Red Submariner dials are the earliest versions of the feet-first variety. They first appeared near the end of 1970 and remained in use for a few years. MK4 dials feature the red ‘SUBMARINER’ text printed on top of white, along with very distinct open sixes for the depth rating. 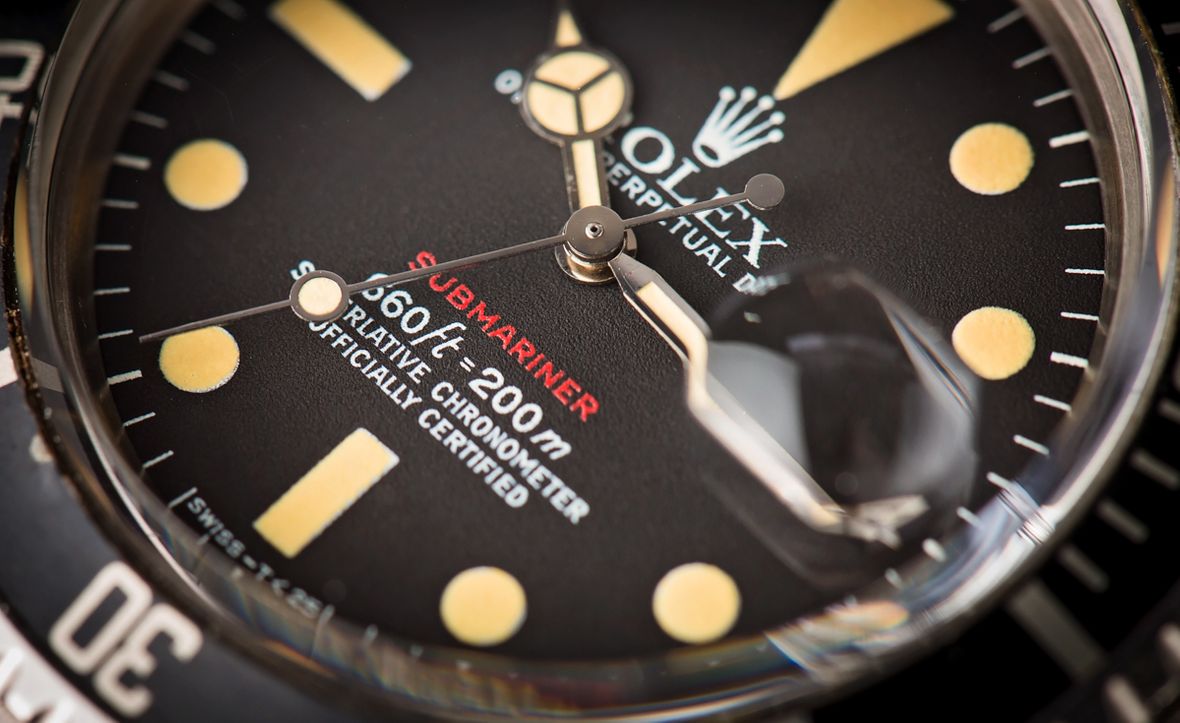 Just like the MK4 version, the MK5 Red Submariner dials have the feet depth rating with open sixes – although the 6s are less open on MK5 dials compared to the MK4. Additionally, unlike the MK4 dials, the MK5 style features the red ‘SUBMARINER’ name printed directly on the dial surface without a white base layer. The MK5 dials remained in use slightly longer than the MK4, despite first appearing around the same time.

The MK6 dial is the last Red Submariner dial to be fitted with tritium luminescence. Like other later-era Red Submariner dials, the MK6 is of the feet-first variety. And just like the MK5, it features its red ‘SUBMARINER’ name printed directly on the dial surface without the additional white base layer. However, the MK6 features closed sixes, and the ‘S’ in the word “Superlative” has a noticeably more curved appearance.

Around the mid-1970s, Rolex stopped producing the ref. 1680 with dials that featured the “SUBMARINER” name in red. The company switched to dials with all white text (sometimes referred to as MK7 dials), which are of course, no longer Red Submariner dials.

Yet, there is a particular Red Submariner dial that wasn’t originally fitted to the watches while they were in production but became available to owners of the Red Submariner 1680 during servicing. Remember, when you own a Rolex, you can send it back to the company for service, and damaged or broken parts (including the dial) can be replaced. Therefore, this brings us to the Red Submariner Service Dial.

The Red Submariner Service Dial (sometimes referred to as MK8) is a very rare variant that was produced sometime after Rolex switched to Luminova lume (in the 1990s). Unlike the six original Red Submariner dials, MK8 dials do not use tritium; therefore they do not include the telltale “Swiss-T<25” text under the six o’clock hour marker. Instead, Red Submariner service dials have the “SWISS” marking to indicate the presence of photoreactive Luminova but retain the coveted red text. In the vast majority of instances, a red Submariner dial would have been replaced with the now-standard, monochromatic black and white dial, making the red service dial incredibly rare. 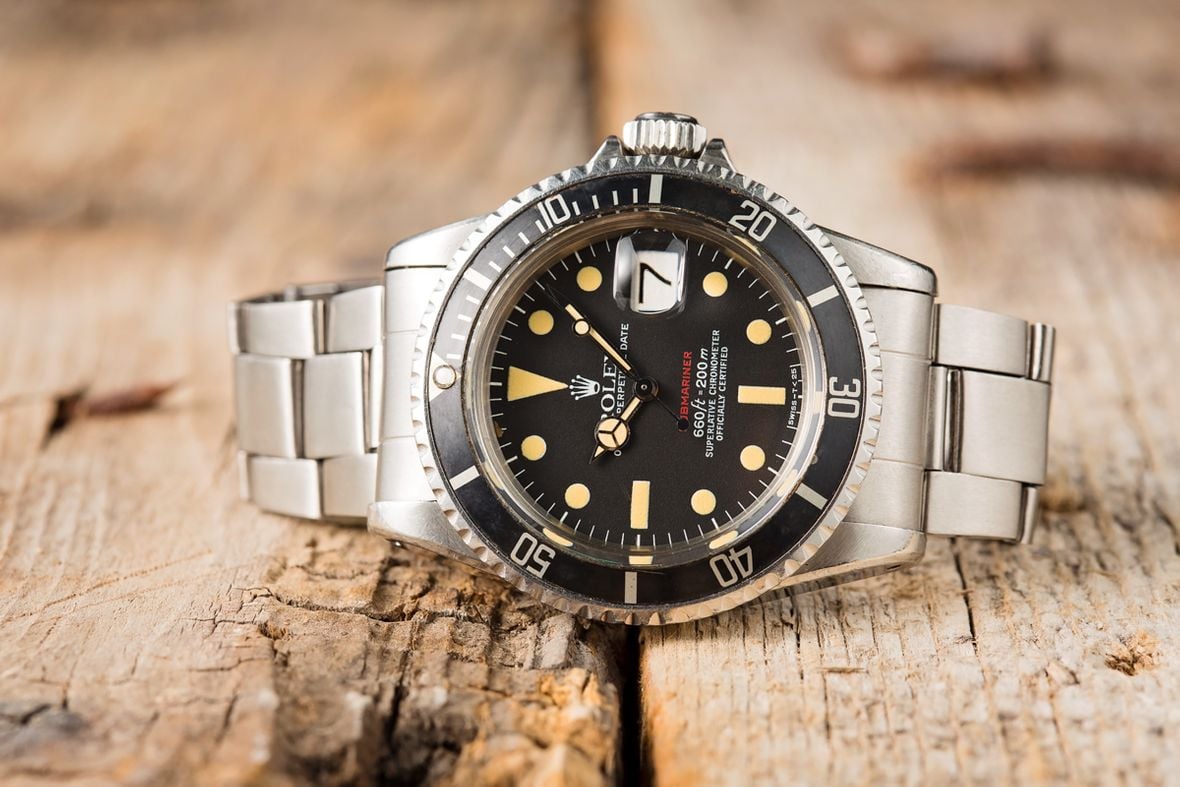 Furthermore, there is another special trait to keep an eye out for when you are looking at Red Rolex Submariner 1680 bezels. As mentioned above, the original bezel inserts fitted to these watches were actually “fat font” bezels, characterized by the thicker Arabic numerals on their timing scale.

Many times, these fat font bezels were replaced over time by their owners because they faded or received scratches and dents. Consequently, it’s challenging to come across a Red Submariner with its original fat font bezel and it certainly isn’t a make-it-or-break-it factor when considering buying the watch. However, a Red Sub that still has its original fat font bezel will definitely be worth a premium when it comes to determining overall collectibility and resale value. 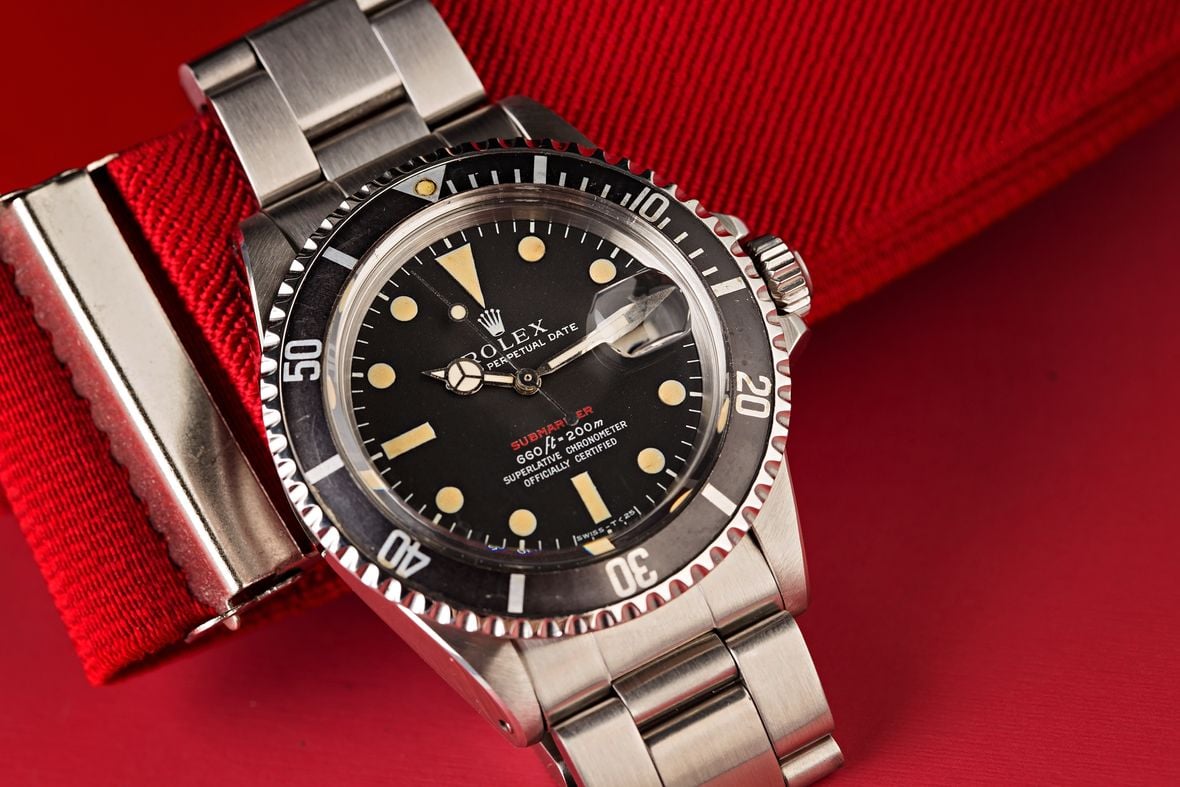 – Expert tip: To ensure that it is an original, coveted, 9315 folded link bracelet, the “9315” code should be stamped just before the end piece on one of the links. Additionally, the end-links will also be stamped with either 280 or 380.

Rolex Red Submariner 1680 watches can also be found with USA-made Oyster bracelets. Additionally, there are also the 93150 bracelets with solid side links, which were introduced in the late 1970s and have been known to grace some Red Submariner 1680 watches. You will also see it on other earlier models as a service replacement bracelet. This bracelet is easily the most modern and robust bracelet for the Red Submariner; however, when it comes to resale value and collectibility, these bracelets are generally considered to be less desirable.

With its unique design characteristics and significance in Rolex’s diving watch history, the Submariner 1680 “Red Sub” is an exceptional and desirable timepiece. Plus, the number of variations available and subtle differences that evolved over a short period make the Red Sub one of the most exciting vintage Rolex sports watches to study and collect. 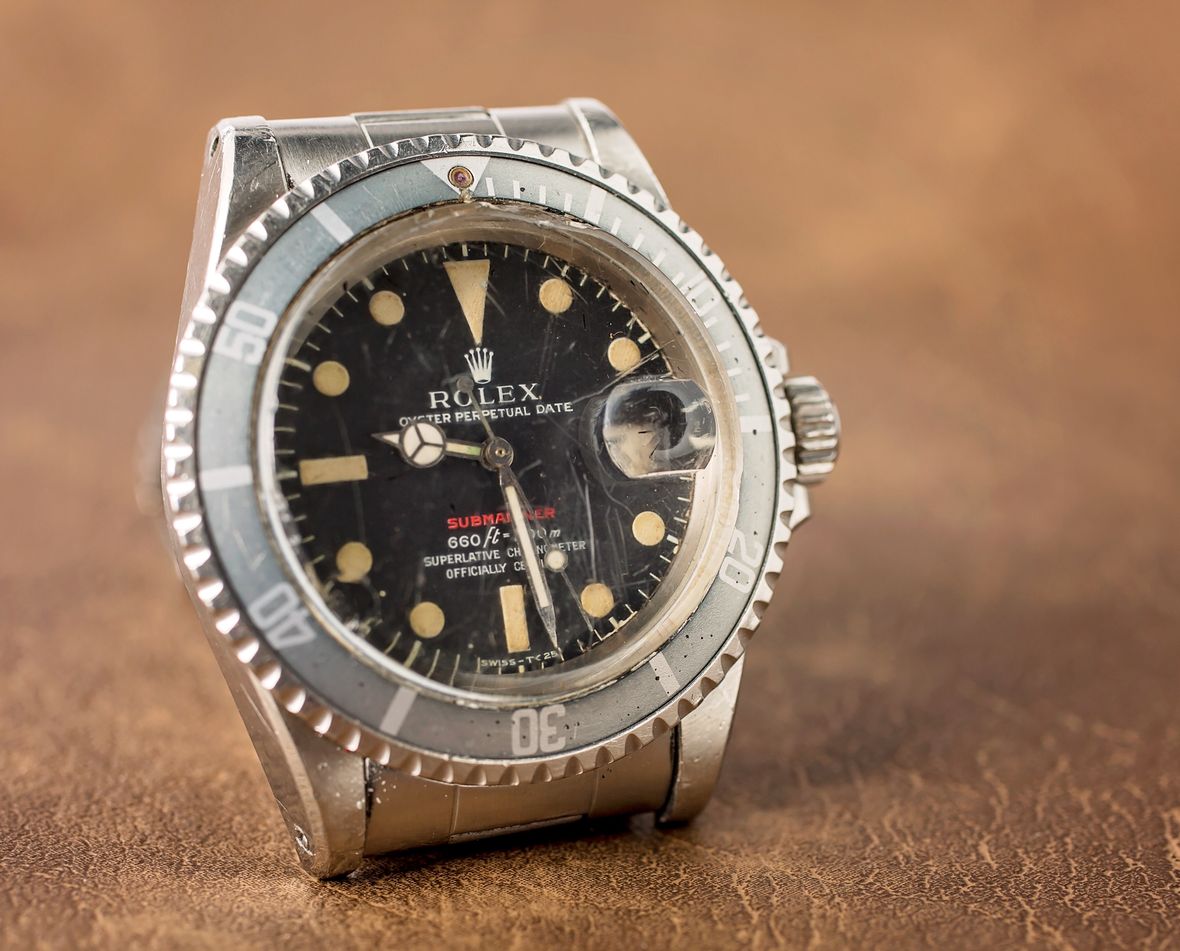